I have really been slacking on the blog lately.  It is surprising how little time I have now that Trent is feeling better!  I would have thought it would be the other way around becaus he is able to help out so much more.  Trent has been baking, making dinner, and running kids to their soccer games and guitar lessons.  It is HEAVEN!!!!  But, because he feels better he wants to spend every minute with me and the kids, so I haven't gotten a lot of blogging done.  I have a huge post in my head though-several things I have been thinking about lately and tons to catch up on.


But I will jot down the details of last week's scan and get to the big stuff later.  We went in for a scan on Wednesday.  Trent and I were feeling good about it but just a little nervous too.  When we got to the Huntsman it was like a family reunion.  It was so fun to see all of our friends there.  They were all thrilled to see Trent doing so well and getting a little hair!
﻿﻿﻿﻿
﻿﻿﻿﻿The lab nurse, Stephanie, pulled us right back to the lab to have his port accessed and pretty soon there were three or four more people back there wanting to say hello.  We were talking about Trent and I needing to take a cruise.  I do want to go on a cruise with him!  There was a time about a month ago when I thought I was losing it.  I needed a vacation badly!  But, I kinda got over that and life went on!  I think the gravity of what we had just been through was starting to hit me.  I was trying to process the fact that I was going to see a healthy Trent again...but with the deformities of cancer.  That is something Trent is just barely starting to see too.  I think that while he was sick it was easy to lump all of the physical changes and blame them on chemo, but some will never go away.  It is not a terrible thing, but an adjustment nonetheless.

When we got back to the exam room it seemed like we waited forever.  Finally Dr. Jones popped his head in and basically just chatted with us for a bit.  He didn't examine Trent's hip but just asked how things were going.  He is a great guy and it is so nice to relate to him on a religious level too.  Shortly after his visit Dr.  Gouw came in with Katie.  He said the scans looked good on first inspection, but going over with a fine tooth comb, there is a spot to watch.  It is most likely fluid on his lungs.  I guess because it is right on the fissue between two lobes of his lung (can't remember which side they said it was) it is more likely that it is fluid, not cancer.  But because we want to be extra cautious we are going to have another scan in two months instead of three.  At that time we will have an MRI on his hip too.  Dr. Gouw did confirm that we are still in the land of NED.  We will take that victory and run with it! 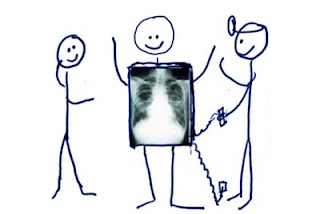 The Healing Power of Music

There's no question that music has always had a very calming influence throughout my life, whether things were good or bad. I have often found refuge during the storm in the messages delivered through this medium. It's almost as if the spirit of music cries out in a way that resonates stronger than the spoken word. I'm so thankful for being able to listen to music during my treatment of cancer. There were often moments while I was alone that listening to a song would strengthen me and provide the necessary encouragement to carry on. These types of messages continually provided reassurance that Heavenly Father was acutely aware of my situation, willing to care for me on an individual basis and furthermore deliver tremendous peace to my weary soul.

Imagine being trapped inside a body infected with a disease that was destroying you from the inside out. It's so very frustrating to be stuck, especially when you've been able to do everything imaginable before but now, because of cancer, have limitations placed on every aspect of life. The simplest tasks were so challenging; being able to move, to sleep, or to eat became very difficult. I noticed that physically and mentally I was spent, but was surprisingly calm and collected spiritually. There were so many times where it was difficult to think of where I had been, am now, or where I would desperately like to be in the future. In so many cases the music I listened to made a significant difference.

I found two songs that have provided great solace and, interestingly enough, the messages are directly associated with two people and their fight with cancer. The music groups were impacted directly with these patients and their stories. I would hope that everyone take a moment and listens closely to this music.

This next one is about the artist's husband and their struggle. He was diagnosed with a brain tumor shortly after they were married. LAURA STORY 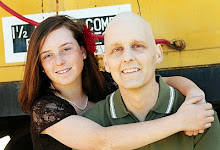 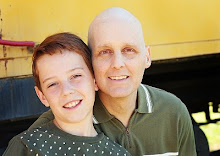